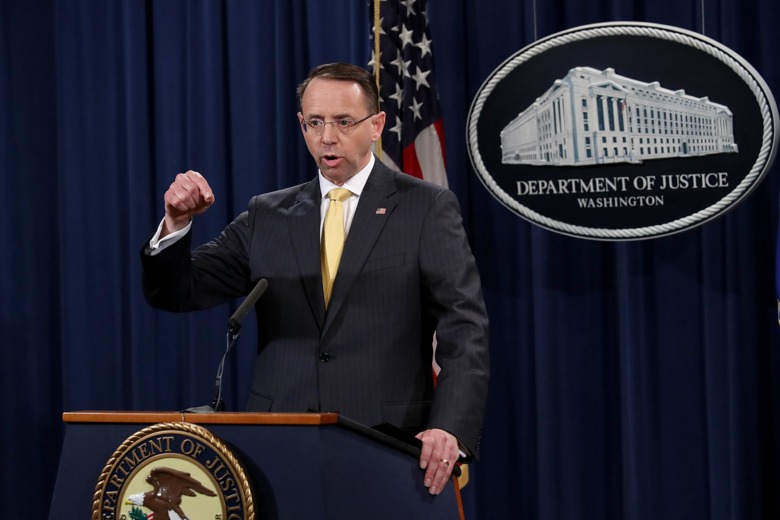 The timing of the recent announcement by Deputy Attorney General Rod Rosenstein regarding the indictments of thirteen Russians appears to be part of an effort to provide possible cover for the FBI, Special Counsel Robert Mueller’s investigation, and the Democratic Party-aligned mainstream media.

The hasty public release occurred via a press statement by Rosenstein on an unusual choice of days, a Friday afternoon that was a lead-in to a three-day holiday weekend.

It is highly possible that the intention was to have the public focus on the headlines coming out of the press conference rather than zeroing in on the underlying facts of the matters at hand.

In other words, there may have been an attempt to employ a frequently used technique of diversion to direct public attention away from the admitted wrongdoing on the part of government, which was rapidly taking over the social media and conventional headlines.

In this case, it would be the effort to direct attention away from the FBI’s failure to investigate warnings that the man accused of the atrocious killing of 17 high school students had expressed a desire to kill innocent people and was in possession of a weapon to carry out his threat.

The second part of the tactical equation is to divert public attention toward a preferred calculated target that in this instance would be “Russia,” which in a puzzling way for many seemed in the present day world of scandals to arrive with a thud.

All of the above having been stated, there was a very palpable manipulation of public perception that occurred across the cultural, political, and demographic spectrum.

The FBI indicated in a statement that, in January 2018, an individual described as someone close to the accused shooter called an FBI tip line to report concerns about the alleged perpetrator mere weeks before the nightmare carnage took place at the Florida high school.

According to the FBI, the caller provided information about the shooter’s gun ownership, his desire to kill, his erratic behavior, and his peculiar social media posts. The caller also specifically brought up the young man’s potential to engage in a school shooting.

The recorded information should have been promptly given to the FBI’s Miami field office for further actions; however, the FBI admitted that “these protocols were not followed.”

Adding to the FBI’s public relations problems is the fact that, in September 2017, the agency had been notified of a YouTube comment in which an individual under the same name as the accused wrote, “I’m going to be a professional school shooter.”

In an absurd response, the FBI claimed that the agency was unable to trace the origin of the YouTube post and therefore closed the investigation.

The announcement of the indictment of the Russians may have been timed to provide the media with the desired talking points that would lead a susceptible public to conclude that the special counsel’s probe was in no way a hoax, a witch hunt, or any other “unfair” characterization. This would have been another important part of the tactical equation, since many Americans had been increasingly viewing it as if it were less than above board.

Interestingly, this is an indictment of thirteen people who will never see the inside of a U.S. courtroom or ever even contest the charges, be arrested, or be extradited. Additionally, it was made clear by Rosenstein that no allegations in the indictment indicate that the activities by the Russians had “any effect on the outcome of the election.”

What the indictments did do, though, was allow the liberal partisan media to crow about Russian “meddling,” which they predictably and dutifully did.

The Obama State Department allowed some of these very same Russians to come into the country via tourist visas and to ultimately use fake identities to troll the social media. Although the indictments set forth the defendants’ organized activities going back to 2014, former President Barak Obama did not stop them or even address the issue.

The indictments helped to eclipse another inconvenient developing story, which would be a major embarrassment for the special counsel’s probe, and that is, that former National Security Adviser General Michael Flynn’s guilty plea is likely to be set aside.

The judge who originally accepted Gen. Flynn’s plea for lying to the FBI has recused himself from the case, since he was also a judge on the Foreign Intelligence Surveillance Court, the very court that accepted from the Obama Justice Department the Steele dossier as evidence to support the issuance of a FISA warrant to spy on members of the Trump campaign.

The new judge assigned to Gen. Flynn’s case has ordered Mueller to release to Gen. Flynn’s lawyers any exculpatory evidence in Mueller’s possession. The judge has also directed that any information which is favorable to Gen. Flynn be submitted to the court, even if the Mueller team believes that it is not material to the case.

This means that even if Mueller claims that his evidence is classified or not relevant, it still must be provided to the judge so that the judge can decide what can be released. This takes away the ability of the prosecutor to withhold or redact evidence on his own.

Mueller’s indictment of the Russians claims criminality because the defendants, as foreign citizens, attempted to use media to influence voters but failed to report their financing to the Federal Elections Commission or register under the Foreign Agents Registration Act.

Using the template and reasoning of this indictment, others who tried to influence an election could be charged, including Christopher Steel and his accomplices, FusionGPS, the DNC, and the Clinton Campaign, while the Israelis and British could bring criminal prosecutions against former President Obama for meddling in their elections.

During the announcement of the Russian indictments, Rosenstein emphasized that there are no allegations in the indictment of any Americans (including any members of the Trump campaign) having knowledge of the Russian activities.

In an appearance on “Fox News Sunday,” enduring talk radio icon Rush Limbaugh warned, “The danger for the president” is that it would be very seductive “to totally embrace” and take at face value the notion that it means he has been “vindicated.”

In Limbaugh’s assessment, the president most certainly needs to continue to “be very careful.”