The recent spate of mass shootings is serving an unseemly purpose for those who wish to strip each individual within our nation of a fundamental constitutionally secured right – the right to defend life itself.

Those with this ill-intent are attempting to shift public attention away from the crime wave that has been plaguing cities and towns across our land.

Look over here at this inanimate weapon is the current rallying cry being used to turn heads in another direction, understanding that the minds contained within, particularly those under duress, will frequently follow.

Due to the exponential rise of violent crime, especially in so-called progressive-leaning cities, the fast-approaching midterm elections seem to be creating a high degree of discomfort in a sizable segment of the current ruling class.

With voters increasingly concerned about their personal safety and that of their families, political elites and their media allies are seeking to change the subject in hopes of saving their electoral skins.

The same people who embraced the de-funding of our police officers and have been serving as cheerleaders for the George Soros-funded assault on the criminal justice system are now using the wretched results of their destructive policies to propose even more devastating “solutions.”

Those inclined to exploit the tragic occurrences of mass shootings are simultaneously seizing a concurrent opportunity to duck responsibility for the massive rise in crime.

How are they accomplishing such a feat? By conditioning the public to jump onboard the “gun reform” bandwagon, which at its core is just more gun-grabbing by the government.

Those who live in urban areas of the country have already experienced the lack of law enforcement presence and decline of justice in the form of criminal prosecution.

Images of lawlessness resulting in the dreadful loss of life, limb, and property have left scars on many a mind and body as a result of an Orwellian “re-imagining” of law enforcement by far-left radicals, a previously fringe portion of the population that somehow managed to consolidate power in the past few years.

Adding to the insidious mix are the numerous jurisdictions across the country that are now saddled with partisan prosecutors who refuse to pursue cases involving egregious crimes.

Then there are the district attorneys across the nation who secured their offices via the political and financial support of Soros, the one-sided left-wing donor who altered the criminal justice landscape in heretofore unimaginable ways.

Currently, there are about two dozen local prosecutors who are running for re-election. They were initially placed into office via financing from Soros-connected entities.

Policies that these seemingly sham prosecutors have employed include the crime-inducing practices of extinguishing cash bail, de-criminalizing violations, reducing sentences, and frequently abusing prosecutorial discretion, all of which have resulted in dangerous criminals winding up back on the streets. Such policies directly correlate with the spike in crime rates experienced across our great land.

Elites of all economic and political persuasions are not immune to the devastating fallout.

For instance, in Los Angeles, California, a category of misdeeds has emerged that specifically targets wealthy individuals. Law enforcement has given the label of “follow-home” robberies to the crimes. Perpetrators seek out finely attired folks at upscale restaurants, hotels, and various other exclusive venues, people who happen to be wearing pricier jewelry and driving more luxurious vehicles.

In a malevolent calculated ambush, carloads of multiple armed suspects pursue victims to their homes and proceed to engage in brutal attacks. Social media users have posted descriptions, photos, videos, and the like, providing graphic examples of these and other cold-blooded criminal activities.

Back to the effort on the part of those who are practiced at the art of deception, i.e., those who in this case are trying to frame the crime rise problem as a public safety issue in need of gun regulation attention.

The right to defend oneself through means of gun ownership is an inherent natural right – popularly, historically, and religiously designated as a God-given right.

God-given rights are a substantive building block of America’s foundation. The Declaration of Independence unequivocally states the following:

“We hold these truths to be self-evident, that all men are created equal, that they are endowed by their Creator with certain unalienable Rights, that among these are Life, Liberty and the pursuit of Happiness.”

These words are based on a belief that every individual is under a protective umbrella of “natural law,” which supersedes any conceptual legal design of human origin.

Another way of saying this?

The State is not allowed to mess around in these sacrosanct areas. 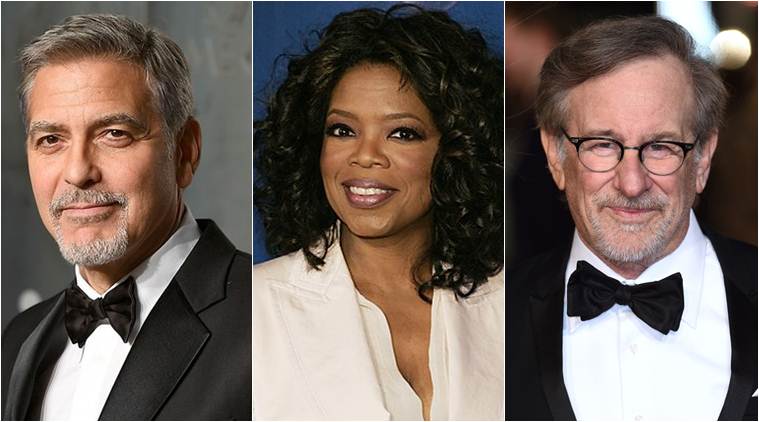 Lending support to the recent anti-Second Amendment march, which was misleadingly called the “March for Our Lives,” was a sizable roster of Hollywood elites.

The participating celebrities, who are routinely shielded 24/7 by their own armed security guards, were among those who were financing and supporting the nationwide protests.

The goal in mind was a singular one—to get other people to give up their God-given and constitutionally protected right to defend themselves and their families with firearms.

The Washington, D.C. protest, along with its so-called “sibling” events, was organized and funded with a considerable amount of help from Hollywood liberals and leftist organizations. Thousands of high school students were bussed to various locales via groups and individuals with links to the Democratic Party.

Despite its official noble sounding name, numerous media outlets, including BuzzfeedNews, reported that organizers were really pushing for full-on gun control legislation. It has also become increasingly clear that the march was specifically designed to gin up the voter registration rolls for the upcoming mid-term elections.

Democratic groups in Maryland, New Jersey, New York, Pennsylvania, and Virginia boosted the number of attendees by providing free transportation for participants to Washington, D.C. According to Bethesda Magazine, a Maryland Democratic House member hosted a pre-march rally and bussed supporters to the march. And the Washington Post reported that the Democrat mayor of Baltimore arranged for thousands of students to be driven to the march by bus. Democratic groups in New York, Virginia, and Pennsylvania also reportedly provided buses to participants.

During the concert, performers proceeded to supplement their music with politically loaded protest visuals.

– Cyrus performed “The Climb” while holding a sign that read “Never Again.”

– Lovato concluded her performance with a raised fist and the words “MSD strong!”

– After Grande sang “Be Alright” she was joined on stage by some attendees who engaged in a group hug and selfie snaps.

– Hudson closed out the show in 1960s protest fashion with a version of Bob Dylan’s “The Times They Are A-Changin’.”

A number of entertainment figures provided money to the organizers of the event, including Oprah Winfrey, Steven Spielberg, John Legend, Chrissy Teigen, and George Clooney. Taylor Swift, who has made it a point to remain apolitical, indicated that she, too, had donated to the march.

Clooney and Spielberg took to the streets to join the protesters. Other celebrities who made their presence at the march known included Kim Kardashian, Kanye West, Jimmy Fallon, Dennis Rodman, and Julianne Moore.

Paul McCartney joined in a march in New York and Amy Schumer spoke at a rally in Los Angeles.

It is apparent that organizers of the march harbor ambition that extends far beyond the initial event. Plans are in the making to lobby lawmakers to achieve desired ends. The finance vehicle for the protest, “The March for Our Lives Action Fund,” is a 501(c)(4) nonprofit organization, which, according to records, was registered on March 8, 2018.

The majority of non-profit groups are registered as 501(c)(3) charitable organizations; this allows donors to receive a charitable tax deduction for their gifts.

However, 501(c)(4) organizations are formed in order to conduct lobbying and legislative advocacy. The choice of this nonprofit vehicle means that donors actually lose tax deductibility for their donations.

On the group’s website, “The March for Our Lives Action Fund” has telegraphed its intent to pursue lobbying, indicating that funds will be used “to fight for comprehensive gun safety legislation at the local, state, and federal level.”

The website also offers a “March for Our Lives voter registration toolkit,” which appears to be a blatant effort to boost Democratic candidates at the polls.