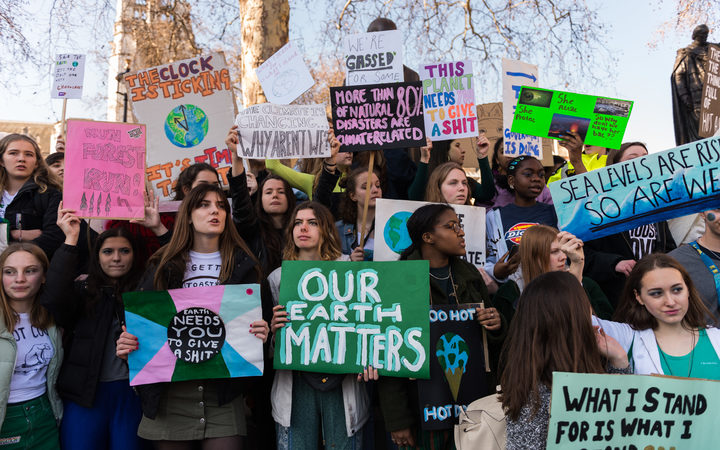 Climate strikes were recently staged around the globe in an effort to bring attention to the supposed emergency state of what was once called “weather.”

Leftists are expert at manufacturing scary crises. To this end, they have managed to re-frame “weather” by giving it a number of anxiety-inducing names over the past few decades. Prior to settling on their latest iteration, they bandied about frightening sounding phrases such as “global cooling” and “global warming,” among others.

Similar to the unsavory designs that came before it, the latest weather-related scheme is as flimsy as a plastic straw.

In a quest to amass power, insure compliance, manipulate minds, and fuel negative emotions, liberals have landed on a single moniker that is broad enough to stick to whatever weather circumstances may arise. Full and complete control over the lives of target subjects is the end goal.

Unfortunately, many of our young people have fully embraced the climate change propaganda, as have the expected tried-and-true liberals.

Much like the “March for Our Lives,” a youth-led event that took place prior to the 2018 elections and focused on firearms, the whole notion of a climate strike looks more and more like a subtle means of ginning up enthusiasm and participation for the upcoming 2020 elections, all to the benefit of the left.

The recent climate protest, which involved millions of students skipping school and taking to the streets, was said to be inspired by 16-year-old Swedish activist Greta Thunberg.

Thunberg was reportedly so stirred by the teen activists at Marjory Stoneman Douglas High School in Parkland, Florida, who had organized the aforementioned March for Our Lives, she decided to boycott school until the 2018 Swedish election.

The year in which Democrats launched what they referred to as the “blue wave” was the same year that the left utilized the anti-gun movement to mobilize younger voters. That was the year 2018.

The Sunrise Movement is part of the reason why the 2020 Democratic presidential candidates are spouting such extreme positions. The group was influential in getting squad members Alexandria Ocasio-Cortez of New York and Ilhan Omar of Minnesota elected.

In an article titled “Too Young to Vote? Get Your Parents to Vote for You,” the Sierra Club website pushes the idea of young people cajoling away the vote of their parents and grandparents by using apocalyptic fear as a motivator. The subtitle of the Sierra Club piece is “Young climate activists in Europe and the U.S. work to sway elections.”

Similar to Thunberg, 10-year-old Lilly Platt prompted a school climate change strike in the Netherlands, during the lead up to the 2019 European Parliament elections.

Platt, along with other activists, came up with the idea of having young people request that adult relatives and acquaintances “gift” them their votes. Platt’s grandfather Jim allowed Lilly to “have” his vote, and the two recorded what became a viral video, which urged others to emulate the action of the grandfather and granddaughter. After Lilly “voted” via her grandfather, she posted on her Twitter account the suggestion that young activist colleagues in the U.S. should generate a “climate coup” during the 2020 presidential election.

Hollywood and the media have been pushing ideological views and doomsday scenarios on our children for decades. Young people have been programmed to accept the notion that in order to save the planet, industrialized nations must transfer wealth to developing nations and forego the Western standard of living.

The current mass protests appear to be timed to activate a portion of the voting base with which the left has struggled for years, the youth vote. Despite the use of Hollywood celebrity encouragement and extensive targeted advertising, the voting turnout of young people has historically come in at disappointing levels.

In an effort to increase their numbers, liberal politicians and media figures have advocated giving children under the age of 18 the ability to vote. Andrew Yang, a 2020 Democratic presidential candidate, has backed a voting age of 16, and a majority of Democratic representatives have supported a bill in the House that proposes a voting age of sixteen.

For radical weather activists, the enlisting of fear as a means of influencing the public is nothing new. They have specialized in dire predictions for decades, including the following:

As catalogued by the Competitive Enterprise Institute during the 1960s, famine and a new Ice Age were imminent.

In the 1970s, water and food rationing and the potential end of all life loomed on the horizon as a result of Ozone depletion.

The 1980s delivered acid rain threats and rising sea levels that were certain to destroy nations by the year 2000.

As the 21st century began, the public was told that there would famine by the year 2012 and that the Arctic would be ice-free by 2018.

Of course, not a single apocalyptic prediction has materialized. Still, the same media that are ready and willing to report every gloomy detail regarding future doom utterly fail to follow up on the accuracy of earlier faulty dire predictions.